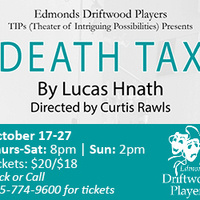 It's 2010. December. Infirm Maxine thinks her daughter is paying nurse Tina to gently nudge her into the grave before the new year. Thinks she's doing this so her daughter doesn't have to pay hefty estate taxes, taxes that take effect on January 1. Nurse Tina is doing no such thing, but when Maxine offers Tina a portion of her sizable estate on the condition that she lives until the 1st, Tina changes her tune. But of course, the plan doesn't go according to plan.

Death Tax is a darkly comic play about death and taxes and how we live with both.

You're not going yet!

Buy Tickets
This event content is powered by the Localist Community Event Platform.