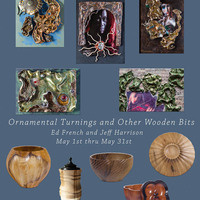 “Contemplations in Clay” and “Ornamental Turnings and Other Wooden Bits”

Ed Cornachio was trained at The Art Center School in L.A. in photography, his early career was in fashion and advertising. 1964 he was asked to inaugurate and then head the photography department at the newly constructed Los Angeles County Museum of Art which he did for the next 18 years. Ed Cornachio brings a unique vision to the show via his career at LACMA. “ I actually held in my hands the works of Van Gogh, Monet, Caravaggio, El Greco, Michelangelo, Picaso, and scores of other renowned masters.” “It was an awesome, yet humbling experience.”

Ed French grew up in Dutch Harbor, Alaska, fished crab and ran fishing vessels in the Bering Sea and then moved to the eastside and worked in the software industry till retirement. Pursuing a love of wood and self made tools led to him constructing his own wood lathe then for a little bit of a challenge an ornamental lathe. Called a rose engine lathe it is operated via cam plates, software, and manual adjustments resulting in small intricate wooden objects.

Jeff Harrison grew up all over the world with Navy pilot father and sea captain grandfather. After attending an Ansel Adams workshop in Yosemite National Park where he was exposed to photography as “Fine Art”, he ended up in Dutch Harbor and then Edmonds with a “day job” in fishing and tug boats and becoming interested in wood in the last several years.

The opening reception for “Contemplations in Clay and Ornamental Turnings and other Wooden Bits” will be held on Saturday May 4th from 1 PM to 4 PM at Gallery North. Meet the artists and join us for refreshments.

Thursday May 16th from 5-8pm. This exhibit will be open to the public through May 31st.